'The thrice-accursed Tyrant of Badab once said that big guns never tire. However, he forgot one thing. It is not the size of the gun that is fired, but where the gun is fired from. That is what your enemy should truly fear.' 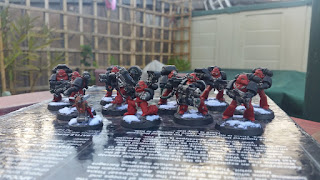 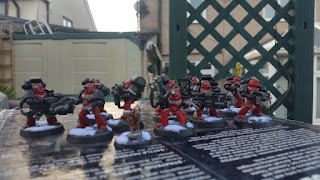 The Crimson Shrikes' famed guerrilla techniques throughout the Shrine War were not just limited to the more adaptable units such as Tactical and Sternguard squads, but were taken on board by all Chapter brothers engaged in the conflict, even spreading to the heavy weapon specialists of the Devastator squads. With the Shrine Worlds being sprawling urban megastructures encompassing millions of inhabitants, long range weaponry such as the lascannon and missile launcher were less effective due to rate of fire and limited short-range armour penetration. This led to Squad Orestes utilising a mix of multi-meltas and grav-cannons. Notoriously short ranged, the weapons could be brought to full effect due to the infiltration of Squad Orestes into the various shattered buildings and facilities found during battle. Indeed, the only sign of any imminent attack for rebel forces was the sight of the squad's armorium cherub, a fact that led to the construct being known as the 'Child of Vengeance'. 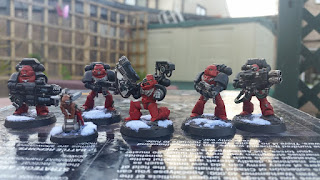 Equipped with targeting devices and extra armour plating, heavy-weapon carrying Marines are capable of delivering accurate and withering amounts of firepower to a localised area, suppressing enemy movement and breaking apart armoured columns. In the case of Squad Orestes, various members can be seen with extra-sensory equipment such as pic-cams and auspexes to enable total superiority over an area. 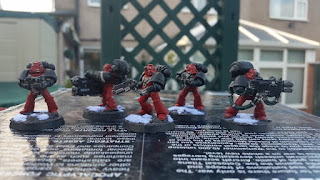 Squad Orestes's most notable achievement during the War was to hunt down the Daemon Engines known as 'The Scarlet Octennial'. Believed to be eight ++Redacted++ of the War God, Khorne, the Octennial tore through civilian centres on Kerishian Alpha-Seven, their rampages killing and maiming hundreds at a time. Squad Orestes were deployed into a vast urban maw wherein the Octennial and the Shrikes were involved in a Terran-month long hunt for each other. The Octennial were finally destroyed, but at great cost to the Shrikes, as seven brothers were killed during the action, including Orestes himself.

Posted by Kobrakei at 14:45 No comments:

'Four years since the death of Calth. Four years. Many have been the nights in Arcology XIX where the words of horror Lorgar's bastard get scream into our comm-net have invaded the thoughts and dreams of both Astartes and mortals trapped down here in the darkness and grime.

I hear them, the cries drowning in blood and ruin. I do not tell the mortals what my warriors and I know, that the screaming is of our fellow Ultramarines being tortured, mutilated and offered up to beings that break all sense of what is possible.

Four years of this. No loyal Astartes ever truly resting, but always guarding against the dark.

This ends today. Their raids for flesh to commit their crimes against the celestial order have decreased. Slowly, of course. But over days, over months, over years, they have slowed. The Urizen is not coming back, and these wretches, these base curs, they know.

Theoretical - I think they've known since the first day. For them this is death.

Practical - Let them die knowing that what happens from here until the end of days and the stars dying is our retribution.'

Posted by Kobrakei at 23:17 No comments:

'The death of mortal flesh is not enough in these times of celestial horror. The only assured victory is the annihilation of the soul'
Biblio of the Culex, Chapter XX, Verse CVII.

'Knives in the night are one thing. But to deploy this monster, this aberration of Humanity, is not a step even I would have considered. This is the work of the Culexus, and that which it hunts will die screaming as the darkness reaches out with cold, dread hands.' 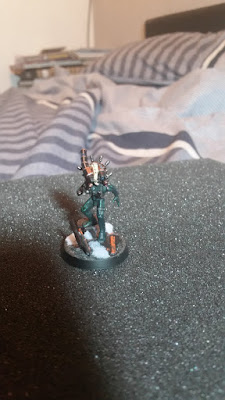 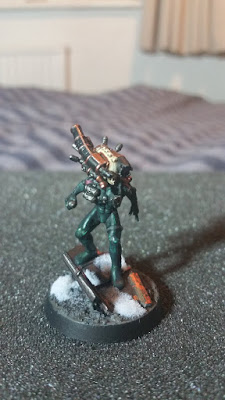 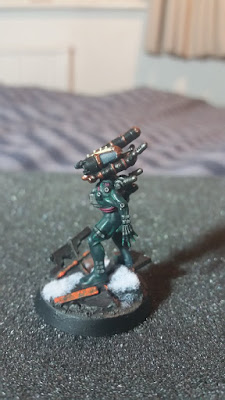 Posted by Kobrakei at 20:42 No comments: