A Chaplain and his Flock

'There is only one way to see that a war is truly won, and it has ever been thus since the first time Man picked up weapon against Man. It is the brutality of close-combat, of sword against sword, that confirms the kill.

'The noise those jump-packs make, well, it goes through you like wind on a cold Hel-Winter night. Course it does, it's got to get an Astartes into the sky. The first few times, you could hear the platoon collectively shudder. They started shuddering to different sounds soon enough though. The sound of sorrowful chants and chainblades. The lads were scared, because they knew they'd yet again witness what the Shrikes had done to the rebels...

There are some things that you don't ever leave behind' 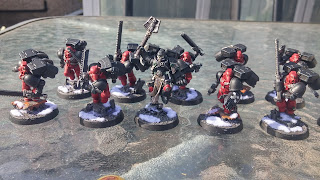 Above and below can be seen pic-capture of Assault Squad Veun of the Crimson Shrikes III Company, led by Sergeant Oris Veun. 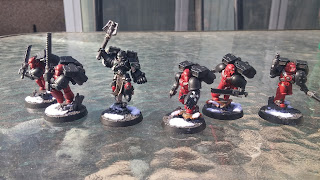 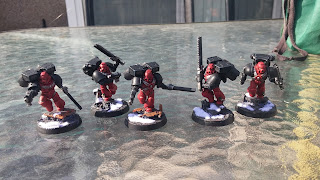 Even within the role of the Adeptus Astartes as shock troops, Assault Squads have a reputation as line-breakers beyond compare. That close-combat is still the most effective way to cripple enemy morale in an age of planet-killers would be shocking if one had not witnessed the ferocity of transhuman melee. Jump-packs are routinely used to speed the Astartes into close-quarters engagement, and also to provide attack vectors that would ordinarily prove impossible without prior planning and execution. Most Chapters use chainswords, although some of the more ferocious (cross-ref Flesh Tearers) will use the heavier, less-common chainaxe. Regardless, the effect is the same - weapons ,that when used by mortals, are notorious for lethality become terrifying in gene-enhanced hands. 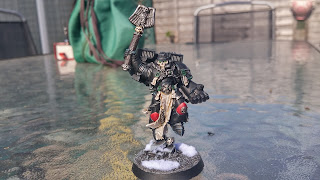 Squad Veun was joined throughout the conflict by III Company's Chaplain, Ptesr Beserides. The honour of being accompanied by such an esteemed figure within the Company, along with the hypno-suggestive, almost mournful chants of Beserides resulted in Squad Veun becoming almost unstoppable within their assigned role. Mortal enemy combatants would either retreat, or be slaughtered under the blades of Veun. The squad had the highest kill ratio of all Shrike units until the insertion of Traitor Legion elements into the War, after which they dropped into guerrilla warfare methodology, using rapid Stormraven deployment to decimate supply chains and sow confusion within enemy lines.