'When we fell onto Kerishian Seven-Alpha, we deployed into the shrine-city of Ikartian. We were surrounded by pilgrims and worshipers, coming in their droves to see His divine wrath incarnate. Angels, they called us. Heralds of the Emperor. They fell to their knees and wept with joy at our coming. We were reminded that these people were why we had come here, to protect humanity.
If only we'd known.
If only I'd known.
If I'd known what would become of the people of that illustrious city, and what they, in turn, would do to Brothers Kaynt and Tormah, I would have killed them all at first sight.'
Sargeant Mortanin Poriat, III Company, Crimson Shrikes Adeptus Astartes 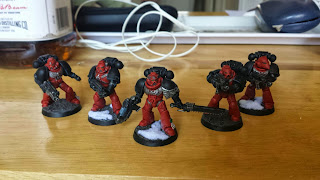 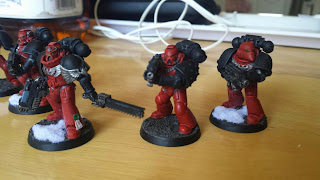 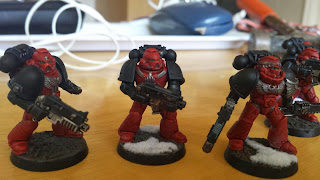 Posted by Kobrakei at 12:42 No comments:

So, my last two posts. Clearly, I've been building up to something, and after a mammoth painting and building effort today, I felt it was time to show off what I've been working on. Ladies and gentlemen, I present the Crimson Shrikes Space Marines! 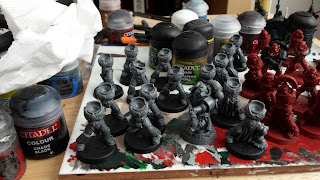 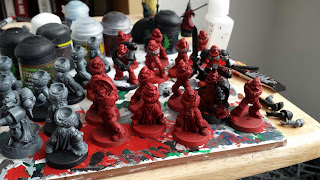 Currently I have the basics of two tactical squads and a unit of Sternguard built and mostly basecoated. To start I'll be building a 1500 point list which I will be posting at a later date, as I'm undecided which Chapter Tactics to use (I'm think gaming wise that the Imperial Fists would be best). These guys are going to be painted to the best of my standard, even if that means I take a long time over each unit, as I feel my Dark Angels have been done for just about tabletop, and I'd like an army that people would coo over. This has been helped by the below two items, which means I can really cut down on basing time and get the red cranked out rapidly! 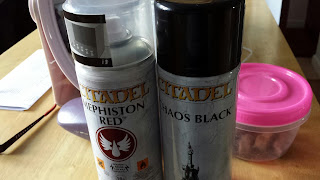 As for how this is going to be presented blogwise, I have taken massive inspiration from this forum thread by Jackdaw on Warseer. It's really incredible stuff, and helps his army to seem less like a bunch of toy soldiers, and more like a force of hyper lethal killers. I also am a massive fan of the way his Astartes are presented, not as a noble ideal, but as merciless killers that answer to no one but themselves and the Emperor. The Shrikes will be getting a backstory during my posts, and hopefully I'll be able to tell the tale of how even the most noble and 'human' of Space Marine chapters can become jaded and intolerant.

There's a lot of work to be done, and I'll possibly be winging a lot of the fluff. But hopefully I can keep you all entertained and interested, and come out with a top shelf looking army as well. Now, where's that spray...?
Posted by Kobrakei at 17:43 No comments:

'They say of the Astartes that we are war personified. With only my boltgun and my armour, I can destroy empires. They forget that the true weapon of a Space Marine is hate. Hate for my enemies, hate for the traitor and the xeno. My armour can be broken, and my boltgun can have no ammunition. But my hate can never run dry.' 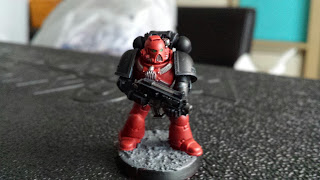 Posted by Kobrakei at 16:08 No comments:

'We had recruited from the planet Kerishian Seven-Alpha for nigh on five centuries. 500 years of new Astartes, new warriors to prosecute the enemies of the Emperor. When we found what the Seventh Ethnarch of Quiescence had wrought with his gene heretics, we fell from the sky as vengeance defined, our need to secure our future fuelling our hate. Had we known the great terror and shame that would be brought to our Chapter's name, we would have burned Kerishian Seven-Alpha from the sky' 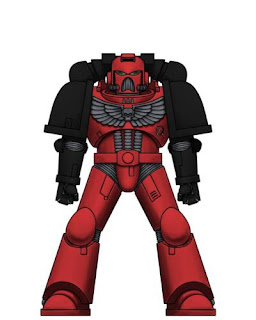