So, after that dramatic (pretentious?) opening, it's time to go into some more details. I'm building a small Blood Angels force, based around the remains of the Third Company after Tycho's death. WIthin this framework, I'm also hoping to explore and develop on my favourite unit within the Codex, the Death Company.

This idea came to me when the last Codex was released. Some of the rumours suggested that there would be a spiritual split within the Chapter, between those who saw the Black Rage as a flaw, and those who would see it as a gift and a weapon from Sanguinius. Although this obviously was something that never quite materialised, the idea stuck with me. With the new releases, and a lot of point drops, I realised I could throw in all the things I wanted without making the army massively ineffective, and so here we are! 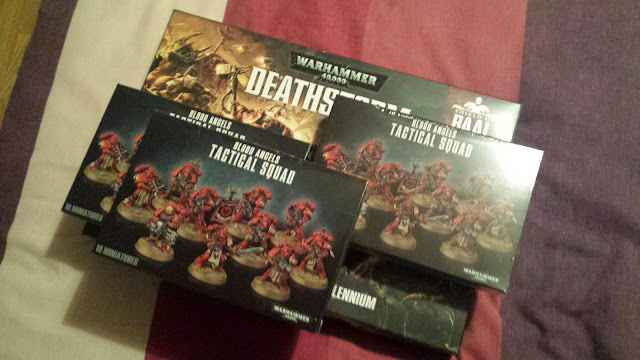 I've also gone and built my first model, and where better to start than with the new Captain of the Third. There's a little tidying up to do with regards to gaps, but he's basically ready to go. It'll be interesting to paint some gold, especially as I'm not planning to use any gold paint... 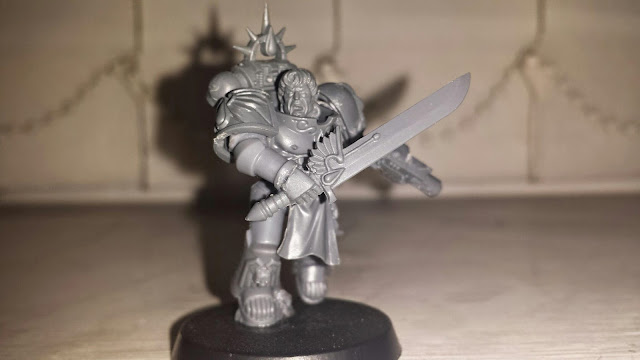 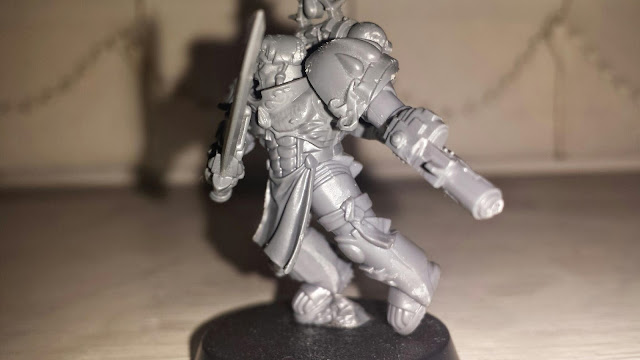 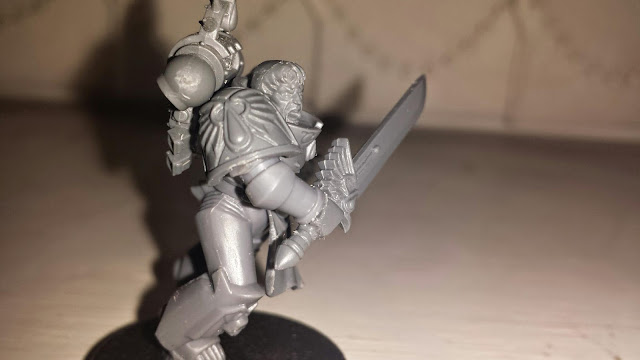 'Ah, but rage. Rage is our legacy'

'Sing, goddess, the wrath of Akhillus, the ruinous wrath that brought on the Achaians woes innumerable, and hurled down into Hades many strong souls of heroes…'
Fragment of The Ilyad. Eighth Century B.C. Poem, composed by the Blind Grekian.

'And so the Angel took flight next to the Master of Mankind. He slew the daemon and the heretic, and punished those who had failed the Imperium. Soon, he was to be left with the Great Betrayer, unto which he was rent, throttled by his most beloved brother. Even in death, Sanguinius never left his children. He became part of us, our genetic core altered by that most traumatic ending.

They call the Rage a curse. Ah, but rage. Rage is our legacy. A final gift from our dying father.' 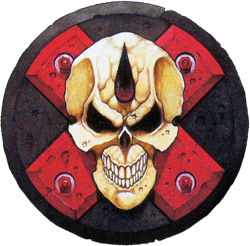 Posted by Kobrakei at 17:48 No comments:

'I was there on the day Lasker took his second pilgrimage on the Thorns. The Chaplains of the Third and Fifth hoisted him unto those spines, while Master of Sancity Farri began the chants of Knowing. Evek stayed up there for what seemd eternal, while even his Astartes biology began to fail him, the poison washing through him like a tidal wave over and over. His left eye began to disolve within his head, pus seeping out of the socket. But only silence came from him. Silence until the fourteenth day, when he turned to me and whispered one sentence.'

'Fourteen days. Unheard of. Impossible. Transhuman biology can only take us so far. It was only the sheer will of Lasker that kept him alive through...that. His single eye looked at me when the Apothecarion carried him away. It was an eye filled with knowledge and wisdom.'

'The wisdom to fight the Shrine War. The knowledge of how he would die.' 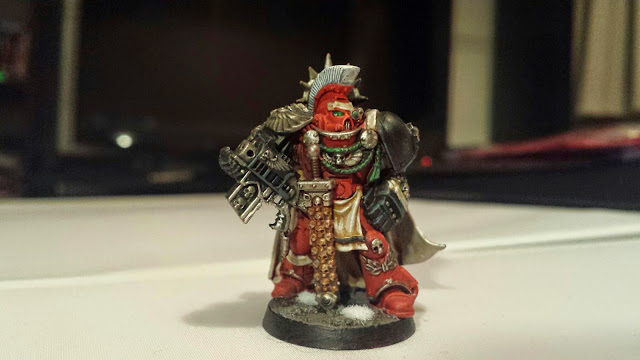 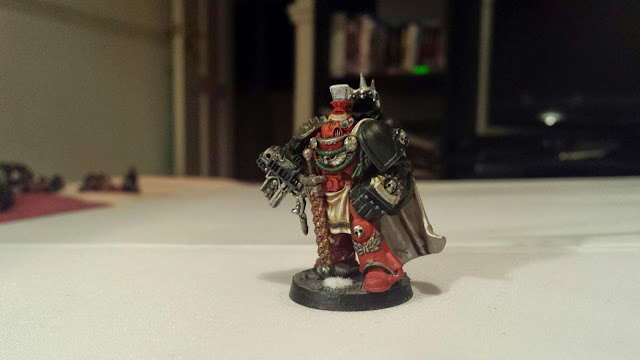 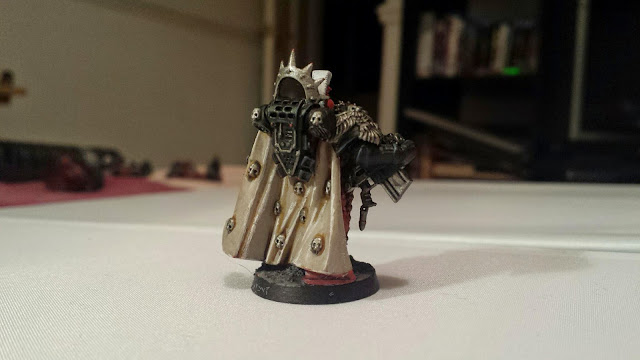 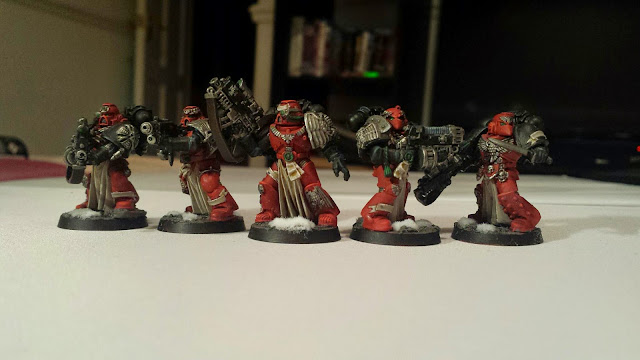 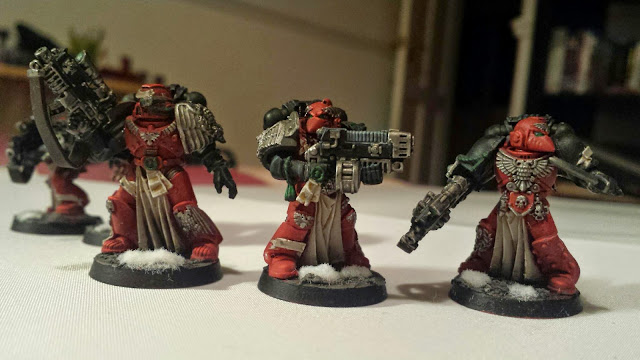 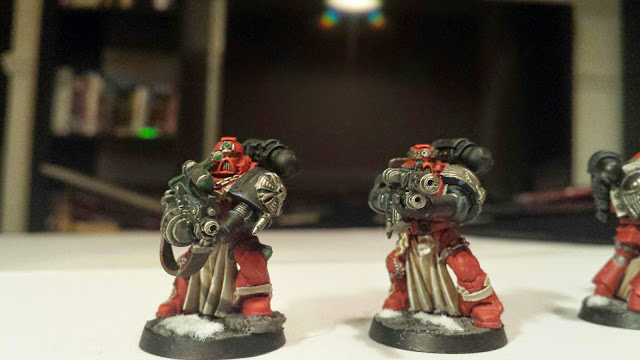 'It is with regret that I must report the death of Chapter Master Lasker during the Drop Pod Assault on the Tower of Aleph. Reports suggest that Shrike scouts triangulated the position of the Ethnarch to the 72nd floor of the tower, and that a potential decapitation of all rebel command structure would be a possibility. Lasker, taking this chance, ordered a targeted Drop Pod strike into the tower. Lasker, along with five pods of veteran Shrikes, fell into various locations of the structure, and almost immediately into heavy rebel resistance. Lasker's pod, containing himself and Squad Espehren (see pic-record above) smashed into the top levels of the tower, and began the short hunt for the Ethnarch. They instead, from vid-capture, found massive and deadly resistance in the form of Traitor Legion (cross-ref - Black Legion) Terminators, with the warlord known as the Terran-Born at their heart.

What can only be described as a titanic, yet one-sided battle erupted. Lasker bludgeoning through Terminator plate like paper, while the blades and bullets of the Black Legion tore Squad Espehren to peices. At the last, it appears the Terran-Born and Lasker took to personal combat, wherein Lasker met his death at the end of Ravensbane.

Lasker's body was later found by Shrike scouts, laid out in the open on an altar of obsidian, his armour repaired, his wounds cleansed. An audio-log found by the body and confirmed to be the voice of the Terran-Born contained only the following message -

'We return this warrior to you unblemished. This is our gift to those we honour. This is the way of the Old Legions'

The Shrikes have recovered from this blow with surprising speed. Indeed, the rapidness of their response would almost suggest that Lasker had his succession prepared in advance, although this can only lead myself to believe that the Master of Shrikes knew he was going to his death.

Addendum - The Ethnarch was believed to never have been within the Tower of Aleph. Indeed, sightings seem to confirm with 85.0192% accuracy that he was within a different system at the time. This leads to the question of how the scouts of the Shrikes were led to believe the Ethnarch was within easy grasp. We must begin to expand our information sources and create a web that covers the whole sector, my Lord.
Posted by Kobrakei at 19:13 1 comment: