'The true prize of any war is to be able to write history to the terms of the victor. The truth of it ends up in the gutter with the bodies of the vanquished.'


'That bastard Isut used us as a scalpel, a tool to exise the cancer that was the Ethnarch. Only he knew that the blade would break in the process.' 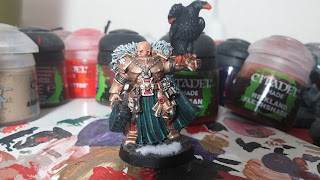 'The Fourth Shrine War. An event that resulted in the loss of millions of lives, the death of two planets and the destruction of an ancient Knight house. All of this can be attributed to one man, Judia Isut. His ruthless pursuit of the Ethnarch led the heretic to seek refuge upon Kerishian Alpha-Seven, and Isut played this fortune like a viola. 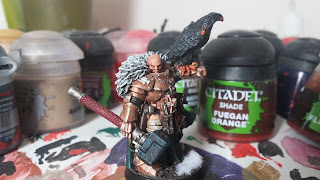 Knowing that the Crimson Shrikes Adeptus Astartes used Alpha-Seven as a recruitment world, Isut let the Ethnarch take root within the shrine-cities of the world, building his forces and spreading his taint throughout the sector, concealing this from the larger Imperium. A heinous crime indeed, but one that was undertaken as a matter of need. The shadow war had been fought between Isut and the Ethnarch for over a decade, and Isut believed that the time to escalate the conflict into an outright war was now. The Shrikes, elements of Knight Household Erritian and various Astra Militarum regiment were sequestered, while the Scions of Harlens World were requested as the personal combat force of Isut himself.  Indeed, Isut was to be seen as an active combatant, leading from the front even in the heaviest of the fighting, free of the need for secrecy and knives in the night. 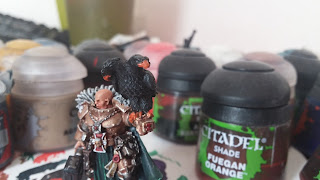 The initial strikes against the Ethnarch crippled the rebels high command and ability to co-ordinate assets. However, this first wave of success was blunted by the arrival of a Traitor Legion force drawn from the Black Legion, the Sons of the Arch-Heretic. Their guidance and leadership helped the Ethnarch to begin a strong and lasting counter-battle, one that would lead to the death of the Shrikes Chapter Master and massive losses to House Erritian.'

Posted by Kobrakei at 18:57 No comments: